What a Wonderful World music book by Kidioke Media 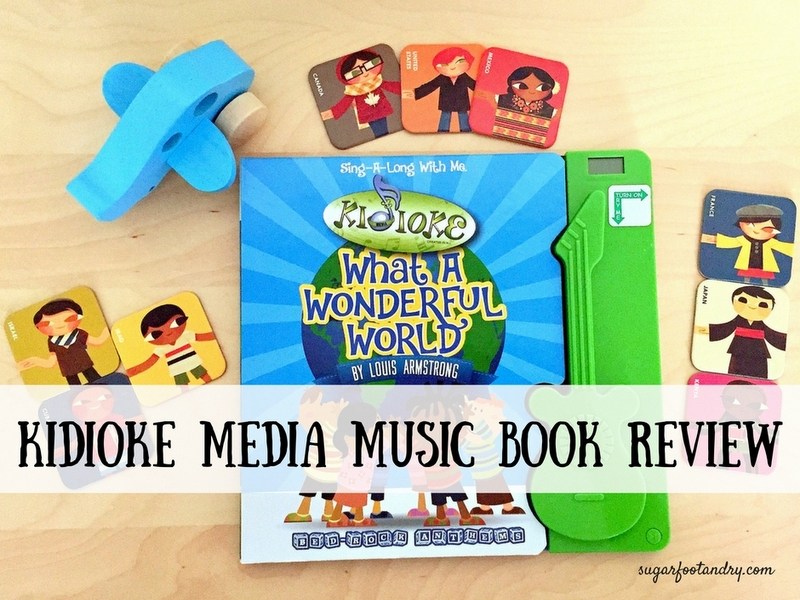 The benefits of reading and listening to music for children are undeniable. According to KidsHealth.org, “...early introduction to music does more than entertain. It can kick-start learning, serve as an important cue in a child’s routine, and offer lifelong benefits. Music contributes to what experts call “a rich sensory environment.” This simply means exposing kids to a wide variety of tastes, smells, textures, colors, and sounds… Between the ages of 1 and 3, kids respond best to music when they actively experience it. Passive listening (like in the car) is fine, but look for opportunities to get your child rocking, marching, rolling, tapping, clapping, and moving to the beat.”

I honestly couldn’t agree more with those statements. So ever since Ry was born and even when he was still in my womb I would read to him popular nursery rhymes, play him music from the Rockabye Baby series among others, and sing to him. Eventually, I even made up a song of my own that even now he’d request during bedtime or when he’s feeling blue.

So when I was approached by Kidioke Media to review one of their music books, I just had to accept. I’ve said this before, I’ve been offered countless of products since I began blogging and I’ve declined the majority of them. Unless we can see a benefit to our readers then we can’t wholeheartedly endorse them. But these music books, which combine classic songs, reading, karaoke, and even counting were just way too cool to pass up and not share with you folks.

Currently, Kidioke Media offers three song book options for purchase, My Girl by the Temptations, What a Wonderful World by Louis Armstrong, and Lullabye by Billy Joel. Kidioke Media was able to acquire the master recording rights to the first two songs, but unfortunately not to the latter. So what that means is that you’ll hear the song as it was originally recorded by the artist i.e., the Temptations and Louis Armstrong, but not by Billy Joel, although the cover version sounds good too.

I have to admit though, Louis Armstrong is one of my favorite artists of all time and What a Wonderful World is one of my favorite songs of all time. It’s a beautiful song with a universal message of loving thy neighbor regardless of color (and boy, don’t we need that to resonate now more than ever), so the book was already a winner in my eyes. But besides the fact that both the song and performer are top notch choices to use as a book theme, the quality of the music book itself is spectacular. The sound is crisp and clear, as if you were listening to Mr. Armstrong on your MP3 player or the radio. The text of the book is composed of the lyrics of the song, and the lovely illustrations act out those lyrics.

When I handed Ry the book for the first time he immediately went for the play button. As soon as it began playing the music he was taken aback a little because he wasn’t expecting it to play jazz as his other board books contain more common children’s songs. But after I started singing the lyrics and pointing out the words to him on the board book he began swaying side to side in rhythm with the music and even tried to sing along. At the end of the song he went for the play button again. I was so delighted to see that he enjoyed the same music as me. As soon as you know it he’ll be a teenager and we’ll probably be disagreeing on his music choices, so for now I’m grateful that Kidioke Media offers a product that both child and parent can enjoy together.

With the gift-giving season in full swing, a children’s music book from Kidioke Media makes for the perfect holiday present. Actually, it’s perfect to give all year ’round – for baby showers and birthdays or to just add to your children’s burgeoning book collection. So head on over to their website before they sell out for the holidays. Kidioke Media has also designed an app, so you should check that out as well.